Thirty-four years ago, I left the Philippines. It was May 1983, to be exact, the end of summer after high school. I went on my way to the States, for college. The plan was simple: school, then back to the homeland.

Didn’t quite work out that way.

Well, now that I think about it, we really didn’t set any timetable for my return. Got the degree. It just took me three decades to get the “back to the homeland” part done.

But back I am.

Should’ve done that sooner, though. Because this place sure isn’t what I waved bye-bye to back in 83, and I’m more than just a bit disoriented.

Well, that’s not totally spot on. The people are the same. And that’s a good thing. I’ve been many places, seen many things, met a lot of folks from all over the planet. But it’s really difficult to describe unless you’ve experienced it yourself, that instant sense of familiarity and belonging you get when you’re totally surrounded by a group of people your soul seems to be totally in synch with for whatever reason. Didn’t even take me 24 hours after getting off the plane to notice that.

But boy, do I need to get “acclimated” to a whole bunch of things you all have probably never really thought about. Little things. Like language.

I’m lucky, though, since my spoken Filipino still sounds like I haven’t been away for three-and-a-half decades, even though I’m sorely out of practice. To those of you out of the loop, Filipino is the standardized national language, mainly based on the Tagalog dialect. My English, however? Well, being in the U.S. all that time has taken its toll on that. But I switch back-and-forth between them relatively effortlessly when speaking. I’m talking about switching between foreign-sounding and local boy. The cognitive dissonance in the expressions of strangers I communicate with as I do the auto-switch is, well, amusing to me. Yeah, I can be a dick.

So sounding native is not a problem. Knowing what the heck I’m saying, completely different story. A lot of the colloquialisms, in particular, have changed over the years, and I didn’t get the memo.

Like when the heck did you all decide to call katulongs kasambahays? For you non-Filipino-speaking readers, tulong is help, and katulong is helper, which is what we used to call housemaids back in the day. Sounds perfectly descriptive and respectable to me. But somewhere along the way, likely from some faddish political correctness conscience-cleansing thing (explained a friend, but I stuck in the “faddish” and “conscience-cleansing” bits), a katulong became a kasambahay. Bahay is house, and kasambahay is one who shares that house with you. A car is kotse, so I started calling our car driver the kasamkotse. But only to myself. I may be a dick, but I’m a dick that recognizes the value of minimizing confusion. In normal situations anyway.

The point, though, is that I fully expect to be futzing around with these linguistic changes in the foreseeable future. Not really because they’re that difficult to assimilate, mind you — it’s that I find it all somewhat fascinating.

Yeah, sue me, I like screwing around with language, and English has been a goldmine. Not the easiest language to learn for most non-native speakers. Which would explain why back in college, I made a pretty decent under-the-table income writing reports and term papers for my foreign student pals (and more than a few locals as well).

The funny part though is that I’m not really all that competent with any language but English, and maybe passable with conversational Filipino. I pretty much suck at anything else. As you can imagine, however, the skill can prove to be quite lucrative.

For example: English is hard. English is tough. This jacket’s leather hide is tough but not hard. You can easily hide that tough leather hide under the bed; it’s not hard at all. Non-native speaker: WTF? Me: Ka-ching!

And now we get to the gist of this post: For all the grief and whining directed at English for being difficult to figure out and learn, Filipino can be just as confusing! The difference, of course, is that vastly more people are trying to learn English than Filipino, so Filipino’s quirky idiosyncracies just comfortably scoot right under our notice. But with my reinvigorated interest in the language, its difficulties have been popping up on my radar all over the place. Not that they’ve been causing me problems — native boy right here! — but I guess you could say I’m now unusually sensitive to these things at the moment.

Take these two examples from Philippine cinema, which I see is still very much a national pastime: 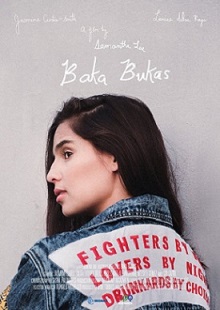 Baka Bukas is a critically-acclaimed indie film written and directed by Samantha Lee. (Full Disclosure: Sam is a second cousin. I’ve never met her, though; I’m not even sure she knows I exist, let alone that we’re related. Just heading off any accusations of nepotism for selecting her film for some exposure here. It’s not like we Filipinos are known for that kind of thing, after all, and I’d hate for the country to get a bad rep.)

Well, every time I see her movie mentioned, its English translation usually appears in parentheses next to the title: (Maybe Tomorrow). Smart. And since it’s now doing the rounds internationally, quite necessary. As anyone armed with a Fiipino-English dictionary will plainly see, besides “tomorrow,” bukas also could mean “open.” It’s just said slightly differently. But that’s the thing: Written Filipino doesn’t have those helpful little marks that indicate long vowels, glottal stops, yada yada. As far as I know, anyway. On top of which, “Maybe Open” makes perfect sense as a title — and I don’t think I should write down the various suggestive movie plots that come to my mind that go with it.

That’s not all. Baka could also mean “cow.” Want to have more fun? It’s pronounced the same exact way whether you mean “maybe” or “cow.” Not that “Cow Tomorrow” or “Cow Open” make all that much sense as movie titles. Or do they? I’m getting ideas.

But can you see the problem? Let’s move on to the next one. 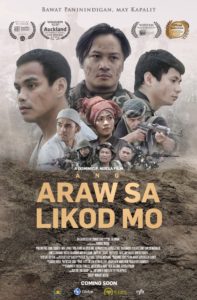 Ang Araw sa Likod Mo, written and directed by Dominic Carlo P. Nuesa (no relation) is a movie I know next to nothing about. But its title sure caught my eye. And purely because of this current fixation of mine on how the words translate to English.

My best guess of what it translates to: “The Sun On Your Back.” Far from edgy or avant-garde sounding, and somewhat safe as far as titles go. But again, best guess, since this time around, we don’t have the benefit of English in parens and I’m just relying on my contextual experience and sensibilities. Araw is “sun,” likod is “back,” and everything is nice and comfy.

But araw is also “day.” And likod, “behind.” So we can conceivably come up with a couple more plausible title translations that could work with that poster, namely “The Sun Behind You” and “The Day Behind You.” The final one — “The Day On Your Back” — puts us in risque territory once more, so let’s just set that aside for another project.

Trying to figure it out doesn’t seem like such a big deal, though, right? Well, it isn’t, at least not until you realize that all those different titles are said and read exactly the same way. Same pronunciation, same rhythm, same everything. Identical. So if I wanted to do a movie script with that last title, I’m pretty much screwed in Filipino as far as originality goes.

Now’s a good time to bring up this disclaimer, by the way: My Filipino subject grades in high school were, um, forgettable. I’d like to think that’s because I made a habit of cutting a bunch of classes regularly then, but the truth is that I really wasn’t all that good at it. So believe anything I said about the language above at your own risk.