For the Morally Handicapped

Got this image the other day on Facebook, as it made the rounds. It really doesn’t need much in the way of commentary — the narcissism and indifference to others is quite clear, nor is it uncommon behavior hereabouts, apparently. 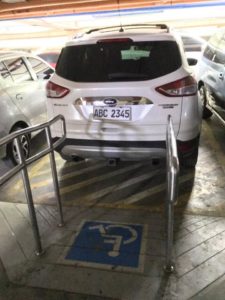 But seeing something like this always brings back this memory:

When I was a student at the University of Maryland in the 80s, it had a huge student population, somewhere in the 35K ballpark. So parking was understandably an issue. When the following took place, I was taking a full load of night classes while working days for The New Republic magazine. That meant my class schedule gave me some practical benefits, like the ability to find parking spots in the lots way closer to the buildings where my classes were actually held. Woohoo!

A student in one of my classes was a double-amputee, nothing from the thighs down. He was older than me, and I think he was a veteran, but I never really asked him what the heck happened — it wasn’t exactly a question that was easy to work into a casual conversation with someone you barely knew and interacted with. He did, however, use one of the coolest-looking wheelchairs I had ever seen at that point: a lowback lightweight sports model, with the bottom of the wheels angled outward for stability, instead of the usual straight up and down.

I always wondered about that chair, though, and why he used it instead of the full-sized standard ones, with all the convenient handles and hooks and storage areas under the seat for bags and stuff. The guy, like all the other students, had a backpack full of textbooks, and he always plopped that huge heavy thing on what was left of his lap as he wheeled himself around. To top it off, as far as I knew, those sports models actually cost more than the standard ones.

Well, I didnt have to wonder for very long.

As I drove into the parking lot one day around my usual 6:15pm or so, I could see the lot was filling up already, as usual, but since there were far less night class students than day ones, the spots furthest away from the building were still fairly clear at that time. So that’s where I parked.

As I began walking away, I passed by the wheelchair dude by his car just a few spots over. I greeted him. He wasn’t in the class I had that night, so I asked him what class he was going to — maybe we’d be going the same direction, we could then go together and I could help him along, I figured.

“Just finished,” he said, “going to get a bite to eat. Finally!”

Something didn’t seem right, though. Then it hit me. “Why are you parked all the way back here? Those two handicapped spots up front are usually empty, the times I’m here anyway.”

“I don’t need them,” he said matter-of-factly. “I’m not in pain, and I can get around well enough. Better leave them clear for whoever may actually need them. By the way, are you in a rush?”

“I’m entering my car from the right,” he said, “since there’s someone already parked on the driver’s side. Too tight and it’ll be a hassle getting in that way. If you don’t mind, could you fold up my chair after I get in and put it in the back?”

From the right side of his car, he basically pulled himself into the front seat, then he awkwardly scooted over to the driver’s side. As I was putting the wheelchair on the back seat, I marveled at how light it was and surprisingly compact I could get it. Still bulky, of course, but not quite as much as I thought it would be.

“That’s why I use this one here,” he said, “instead of my regular one with the motor. That one’s heavy as sh*t, takes up a lot of room and a real pain in the ass to get in and out of the car. I’d have to use an h spot for sure if I took that one.”

I had another question. “Why don’t you park closer then instead of back here? Assuming there’s a spot, of course, but I do see free ones every now and then.”

He just shook his head and smiled. “Better chance of finding a spot back here where I don’t park next to anyone. Easier to get in and out. Wish I had the money for a van, saving up for one, then it’d be way easier with the sliding doors. Until then, this’ll do fine!”

We talked a bit more about how his car was all rigged up with the accelerator and brakes integrated with his steering system (cool!), how much that cost (lots, and he got the whole car used and already equipped, which is why saving up for a new comparably engineered van was no small feat) and some other chit-chat I forget now (probably about the one hot chick in that computer programming class we shared haha). We said our goodbyes and went our separate ways.

And that’s who and what I remember and think about whenever I see images like the above.

Hard not to compare and contrast my former classmate and the driver of ABC 2345. One is severely handicapped. The other one has no legs.

« Telling the Coins Apart is Easy! Jeez Louise… » You Voted Wrong? Not Really.