Mr. One Percent or Why I Don’t Smile in Pictures

Note that this was written before the Republicans took over the label and turned it into something… dirty. Sigh.

For as far back as I can remember (and that goes back pretty far), I always seemed to find myself as part of that group of what I’ve started calling “One Percenters.”

In school, for example, every year they made us take those “standardized aptitude tests” I guess is what you call them, and every year — at least beginning with the year I started giving a futz and began peeking into those official-looking envelopes with the results about a month after the tests they told us to bring home to our parents — my “percentile rank” was 99+.

I considered that + a real hoot, actually, since back then, grade school, I was in constant academic competition with other honors contenders. One notable one was, in fact, quite brilliant but also a militant asshole. Well, this militant kid always hated the aptitude test results for one very simple reason: his always topped out at 99. So for about a week every year, guaranteed, you’d find him loudly dismissing the validity of aptitude tests to whoever he could get to listen. His rants, interestingly enough, always seemed to get louder whenever I was within hearing range. I on the other hand always played the “this shit’s no big deal it doesn’t matter” cool card. Man that always pushed Mr. Militant into a murderous rage. hehehe

I’ll spare you all the other similar examples from my school career and fast forward to the mid-90s, December 1995 to be exact, only a few days before Christmas. I had been dealing with constant severe headaches among other things. Diagnosis: brain tumor. Actually, they were pretty confident that it wasn’t a tumor but a cyst. An endodermal cyst, to be exact, about the size of a golfball and intertwined through the good old brain stem.

Long story short, they got it out and I survived, obviously. Four surgeries total — two “maintenance” ones of a few hours each, to put in a shunt to relieve the pressure from blocked brain fluid that had built up (cause of the massive headaches, apparently), and then another surgery later on to replace the original shunt when the damn thing just failed and stopped working for some reason. Then there were the two major brain surgeries — if memory serves, they averaged out to about 14 hours each. That’s just what everyone told me after, from the doctors and nurses to family and friends who hung around and waited in the hospital lobby and lounges. I was obviously knocked out through the procedures, so I guess I had the easy part in the drama.

There really should have just been one major surgery — they came in behind the left ear and tried to scrape the growth out from there, attempting to avoid all the uber delicate and finicky brain stem nerves. Well, it only mostly worked. They had difficulty getting to the cyst, as you can imagine, and weren’t sure if they managed to get it all out. An MRI eventually confirmed their suspicions — they left the cyst capsule and sac, I think is what they called it, so it was still anchored and refilling with fluid and growing and, bottom line, they had to go in yet again to get it all out. But this time, through a back of the head no more futzing around direct through the brain stem route.

That last major surgery happened a few months later. In the meantime after the first major cut-dig-and-scrape, I forgot to mention, I had an extra hard time getting myself up and about from the trauma. For a bit more than a month, I was hospitalized. Knocked out for most of it, apparently, since I literally do not remember any of that month or so. A good thing, I guess, since apparently my lungs collapsed, I had to be intubated (and still have the serious-looking scars on my throat to show for it), and was generally not in a “I want to get up and out of here” kind of mood.

Clearly, I eventually got out of there. Except I kinda left the hearing in my left ear behind. Most people, they said, would get their hearing back completely after they recovered from that “enter behind the left ear” procedure, but a very few for some reason, never do. Well, I’m now stone deaf in my left ear.

Zoom ahead a few months to the next major procedure, where my surgeons went straight for the gusto right through the good old brain stem. As you can probably guess by now, the doctors were all, “Oh, there may be some minor nerve-related issues afterwards — most recover on their own, a few may need some therapy, a very few do experience and exhibit varying degrees of nerve damage, from mild to severe facial and ocular palsy, yada yada yada…”

Well, guess how Mr. One Percent ended up. Yup, they got the whole thing out — post-surgery MRIs show no damage and the surgeons slapping high-fives all around for textbook evidence of a job well done, while:

• I cannot move my eyes horizontally very much; they, in fact, point inwards severely (I am cross-eyed); the right one, in fact, isn’t even level with the horizon — although I can see with it and it is the sharper eye, when I use it, the combined double-vision and skewed horizon gets me all confused and screwed up, I’ve taken (and gotten used) to covering up the right eye and working only with the left one.

• I have a partially paralyzed throat; for the longest time, over 6 months, I wasn’t allowed to eat through my mouth, instead taking in my liquid diet (Ensure Plus) through a feeding tube sticking out of my tummy called a G-tube (for gastric tube). The three Ensure Plus flavors I remember were vanilla, chocolate and strawberry, with strawberry being my favorite since it appealed to the one sense I had available to judge those meals by — it smelled the best. Those were my only meals for many months, at least until I successfully finished therapy that trained me to eat safely (enough) with a semi-paralyzed throat.

• And, here’s the big one as far as my ability to communicate effectively face-to-face is concerned: I have severe facial paralysis; I speak with a very bad lisp, but worse… I cannot smile.

And that is the long story behind why I don’t smile in pictures.

But back to the one percent thing. Get this: There was something so rare about my condition (or some aspect of it), that the doctors asked me for permission to write it up in a medical paper they decided to do and try to get published. I allowed them to use my MRIs too. Last I heard, they did get it published.

On a related note, about a year after surgery, I got word that some young (-ish) surgeon was doing some interesting nerve grafting technique that could help me regain use of my facial muscles. Or at least some of them. So I went to see him. His technique: He would cut and route the nerves from one side of my tongue, grafting them over to the facial muscles (I don’t remember if they went to both sides or just one side of the face). Then, I would be retrained somehow to learn how to control my facial muscles with those tongue nerves. The remaining nerves on the untouched side of the tongue, on the other hand, supposedly would then compensate for the relocated nerves, eventually bringing the tongue back to normal use. Of course, “A very small number of patients experience nerve damage and lose full use of their tongues…”

I’ve learned my Mr. One Percent lesson by now. My response? About as clean a version of “Eff that” as I could come up with in short order. And that’s now the standard party line: “Not a life-threatening condition you’re proposing serious surgery for? Eff that.”

So there you have it. Am I bummed all that happened? Hell yeah. It’s not like I don’t get reminded daily that hey, things just aren’t quite normal anymore, Mr. Chuckles. But it’s just one of those c’est la vie things that neither angers nor depresses me.

On top of which, it’s far from common knowledge that after my last surgery, I spent a number of weeks at a rehab hospital (in Mount Vernon, Virginia, I believe it was) that specialized in treating folks who’ve experienced traumatic brain injuries — accidents, strokes, brain surgeries, etc. Although no way no how did I want to be there — I can’t think of anything more depressing than to be around a whole bunch of other sick people! — I couldn’t help but keep my writer’s cap on to observe. For one thing, I noticed that there were a heck of a lot of cancer patients in there, clearly way more than half of the patient population. A few strokes here, a couple of car accident survivors there, but it was one cancerous brain tumor story after another as we were forced to tell our “how our asses ended up in here” tales to everybody else in those large group discussion circles I couldn’t escape from (I could barely move and was being pushed around in a wheelchair). 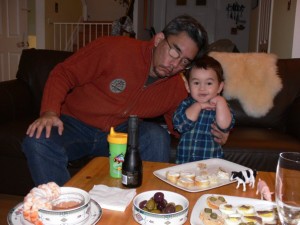 Well, from what I eventually learned about the disease, most if not all of those brain tumor patients I encountered at the Mt. Vernon rehab? Probably dead within a year or two. Me? My wife and I had a son who just turned 3 last week — here’s a picture of the two of us together his second New Year’s Eve celebration, an image that pleases me no end — and we also added twin girls to the family fold seven months ago.

Yeah, the medical issues were a bummer. But damn, it sure could have been oodles worse.

« When the Invaluable Benefits of a Good Education – BAM! – Clicked in My Head » The Unbearable Lightness of Shit Just Happening