Why not? Because, dear reader, we — OK, I — will tend to fixate and obsess on something so totally unromantic and will likely ruin the whole damn thing for you, that’s why.

Here are two examples from my not so recent past. Needless to say, spoiler alert! Although, these movies came out so long ago (man, am I that old?) that if you don’t know how these movies end by now, normal people of a certain age will be like, “Are you freaking kidding me?” But still, you now can’t claim I didn’t give you fair warning. 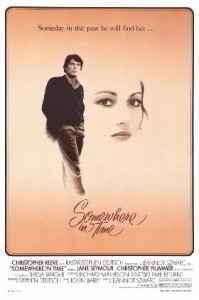 First up is Somewhere In Time, a 1980 Christopher Reeve/Jane Seymour story about time travel. OK, obviously it’s primarily a love story else I wouldn’t be bringing it up now, but the time travel thing is actually pretty cool and really how my girlfriend at that point in time, let’s call her Theresa, managed to get 14-year-old me to take her to see it. Maybe I can sum up this story in one nice little package for you — bear with me, please, on any errors since after that initial viewing, I don’t think I caught more than bits and pieces of it on late night cable, and the last time that happened was probably the early 90s:

Reeve was a young playwright. Backstage, after one successful opening night, amid all the festivities, an old woman came up to him, put a watch in his hand, and said cryptically, “Come back to me.” Then she left and he’s like, “What the…?” but continued partying. A day or so later, he tracked her down. Unfortunately, she passed away after the backstage thing.

Turns out, she was a stage actress from early in the century (teens?) and — surprise! — back then she looked like Jane Seymour. Her portrait, of course, got Reeve wishing he was Superman so he could figure out a way to go back in time. Turns out, he was indeed Superman and did figure a way back. Not really sure about the details — something to do with self-hypnosis, I think — so making a serious mental note to Redbox this movie for research.

Anyway, if memory serves, for the whole thing to work, the deal was that he had to totally immerse himself in the trappings of the period he wanted to go to (clothes, old hotel room with old furniture, etc.) and that he rid himself of anything and everything that may remind him of the present. Done (“Look, up in the sky…”).

OK, let me fast forward scan through everything else. He went back. He found her. They fell in love. He gave her the watch. They’re happy. They made plans to get married. Then Reeve pulled out coins from the 70s from his pants pocket, which I can only assume he brought back with him accidentally, because after all, there probably weren’t any laundromats or video arcades back then. So POOF! He’s pulled back to the present. Lots of crying and anguish. He tries his darnedest to go back, but no joy. He dies from a broken heart. The end.

Tragic. Decent romantic story. Even a beautiful theme song I will eventually use with much success in future romantic encounters. But our post-movie conversation went something like this…

Theresa: Nice, huh?
Me: Mmm…
Theresa: So, what did you think?
Me: It was OK.
Theresa: OK? That’s it?
Me: Well, what I really want to know is, who made the watch?
Theresa: The watch?
Me: Yeah, the watch! She gave it to him. He goes back in time, gives it to her. To give back to him later. So, who made the damn watch?!? And who bought it in the first place? It’s just there, going around and around in circles with no beginning!
Theresa: …

Hope I didn’t ruin the movie for her, although I probably did. At least took some of the warm out of the warm fuzzies anyway. And no, this didn’t break us up. We were still together a few weeks afterwards, which to a 14-year-old girl must have been three or four “anniversaries” down the road. 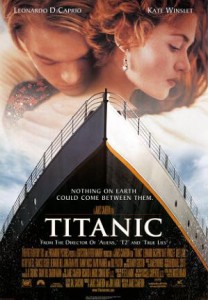 Ready for the next example? OK, fast forward to 1997. 1997? Then the only movie I could possibly be talking about would be — you guessed it — James Cameron’s Titanic.

Now, this Leonardo DiCaprio and Kate Winslet film’s so huge, as of this writing making a kajillion zillion dollars on record worldwide, there’s no way in hell you haven’t seen it. So, if I have to use “spoiler alert” before the next few paragraphs, what say I just bop you upside the head and call it a day?

I mean, really now, in 99 they found this tribe on the Amazon that had no previous contact with other humans. Except one of the explorers pointed out the tribe must have had some dealings with folks from Brazil because the women kept chanting, “Rio! Rio! Rio!” The expedition’s tag-along Discovery Channel camera man, a bona fide member of a profession made up of probably the smartest and bravest explorers on the planet (think about it… how else do they get all that amazing footage of the “pretty boy” adventurers/show hosts… the camera man must’ve gotten there first, and hauling heavy-assed film cameras to boot!), well, he said, “No, not Rio. Shhhh. Listen closely. You hear that? They’re chanting Leo, Leo, Leo…“

But I digress. Back to my point.

You all remember the scene then where Jack (Leo) had managed to help Rose (Kate) onto a lifeboat, and she was well on her way to safety when, at the very last second, she leapt back onto the Titanic?

She couldn’t bear to be away from him! How romantic! Puh-leeze. How effing selfish and dumb, is what I told my wife afterward. Rose all but killed Jack for sure. “Honey,” I told her, “if I tell you to park your ass in the lifeboat, park it, because I’m not doing it just to save your pretty behind, it’s so I don’t have to worry about it anymore and I can focus all my energies and resources on saving my own ass! OK?”

“But,” my wife argued, “he could die! Then she would never get to see him again!”

I nodded. “That’s true. But, if you really love him, you got to give the guy the best chance at survival. Besides, who’s to say that while he’s on that highly unstable makeshift raft and a little girl is trying to get on, Jack won’t be like, ‘Hey, little girl, I have a hot high society babe waiting for me, and I’m a betting man, so I’m willing to wager she’s got that big-assed diamond they’re all looking for in that coat pocket of hers, so go find your own raft!’ <kick>”

P.S. OK, I admit I’m actually a romcom movie kind of guy (got DVDs of Love Actually, Notting Hill and When Harry Met Sally), so those kinds of movies we don’t overanalyze since, well, they make us laugh. But the more serious stuff? C’mon ladies, if you’re going to force us to watch those, be prepped to deal with post-ranting over any gaping holes in logic and reason, It’s only fair.